July 31, 2020
The first (of hopefully many) session reports in my Seas of Sand setting.
Dramatis PersonaeHanid, an ex-pirate kerosene-refiner. Aspiring war criminal/profiteer and oil-field magnate; ship's extremely thorough quartermaster and book-keeper. Isfandiyar, ex-pirate scavver. Mostly in it for the cash and the tattoos; ship's backup book-keeper. Nadeera, trained academic "archaeologist." Interested in seemingly everything, lots of connections; hopes to maybe help Khalkadinn, her home city. Rahmuna, ex-noble ex-circus performer acrobat. Mostly running away from her problems; ship's helmswoman and de jure captain. Selb, trained blacksmith-turned-brawler. Strong and silent type; arguably the most level-headed of the crew. The Invisible Hand, the crew's Qasiran ketch, plus Malik, a loveable-yet-foolish deckhand, and Saranah, a grizzled and well-worn helmswoman for when Rahmuna's not around. Res Gestae First Days Out
The crew began in Qasira, city of merchant-princes and as…
Post a Comment
Read more 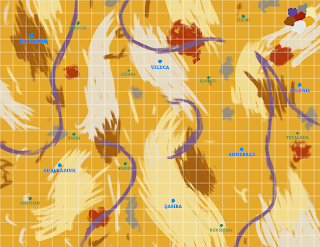 I'm working on a setting that's called the Seas of Sand; it's a big desert that's filled with liquid-like sand. During the day, the sand is liquid, meaning you'll sink if you walk on it, but you can sail a ship across it. At night, the sand cools and hardens, so you can walk across it, but ships get "frozen" in place.

It's a naval campaign setting, basically, but it's in a desert, and thus other, unusual things happen.

I've now run about 4 sessions with some OSR types across two campaigns, plus a handful of test sessions, so I've got some mostly-workable rules and a map, which I figure I'll share.

This stuff is geared for GLOG, but is pretty easily hackable elsewhere.

The first are the rules for sandships:
Sandship Rules These rules cover the basics of sandships, the big wooden ships that sail across the dunes. It's got their four stats, some ship conditions you can suffer from, and a list of ships. All pretty straightforward; a lot…
Post a Comment
Read more

July 10, 2020
This is a class for my WIP desert-naval setting called the Seas of Sand; outside the context of a giant ocean of sand, it's not clear to me how much utility it will have.
GLOG Class: the Dunerider (aka the Sandsurfer)A: Sandsurfing, Stunts, Dunespeech,  B: Evasion, Catch the Dune C: Soul Arch, Top Glide D: Shoot the Tube, The Big One
It's worth noting, before we get anywhere, that while the dunes of the Seas consist of a lot of ups and downs and real sandsurfers can really only go down, I broadly assume that trained duneriders can move up and down a dune-side with equal speed. Call it subtle wind-sand magic, if you want.
Almost all of these template benefits only apply while on your duneboard; Dunespeech you can use anywhere, but the others require you to be on your duneboard (or, you know, immediately near it). Use your good judgement.
You gain +5 ft. of movement while on your duneboard per Dunerider template you have. (I assume an ordinary person's walking speed is 30 ft.)
St…
Post a Comment
Read more

Why GLOG & How GLOG


Why GLOG? In short, because GLOG is the most OSR of the OSR systems.
I'm a relatively recent convert to the OSR scene. I only started getting interested in the scene around a year ago, and I've only been playing and running OSR games for the past few months, barring a couple of Knave oneshots.
Here's why I got into the OSR, coming from a deep-5e background: Lower-stakes stories, but higher tension. You've got fewer hitpoints, lower levels, and less gold, but the bits and pieces you do earn are all the sweeter. Simplified rules. There's less fiddly bits, there's less page-flipping, there's less crunch between you and the game. Flexibility, and ease of hacking. People in the 5e space (and parts of the indie/storygame space, tbh) get very squirrelly and defensive about hacking. I hacked a lot of 5e, and it took a lot of convincing to get people to come on board. …
1 comment
Read more

I, too, have made a terrible decision, and I, too, have made my own GLOG hack. It's called Sludge GLOG; also known as the SLOG. It doesn't acronymize correctly, but I refuse to call it "the Sludge Laws of Gaming" or something.

What is Sludge GLOG? It's a GLOG hack. Here's a non comprehensive list of what it does, particularly things that might be a little bit different: It's roll-under-stat for checks and saves, but roll-high for attack rolls. I've always hated the weird inverse-subtraction math you have to do in base GLOG, so now it's this. It's kind of bullshit to have both roll-under and roll-high, but it is what it is.A skill system where skills add a 1dX to your stat when you make a relevant check, and X increases as you use the skill more (kind of, there's more to it than just that). It means skills are independently-tracked from levels, it means they're never not-good (like x-in-6 skills can be), and it means they aren't a se…
2 comments
Read more

Qasira, a City on the shores of the Seas of Sand

June 23, 2020
Written for the Cities Challenge (its rules are "make an interesting city") floating around the OSR discord, particularly #glog-ghetto.

Presented as a series of tables. Yes, the names of cities are ripped from M&B; I make no claims of originality. This city comes from my deep-in-progress desert-naval "Seas of Sand" setting, where sailors travel on an ocean of thin sand, more liquid than solid.

You should be able to hack this into any given system.

1d6 Ships in Port
The Shrike, a privateer, battered and patched; its sails, once black, have run to a dusty brown. The Sultana's Fancy, a silk merchant, fresh and trim; its figurehead depicts a handsome young man, shirtless, face hidden behind a cowl.The Pride of Veluca, a captured warship, cracked and weathered; its hull is in the process of being repainted to Qasiran red. The Ariadne, a salt trader from distant southern ports; its crew speaks a strange tongue, and bedeck themselves in bronze.The Bantu Haya, a &quo…
Post a Comment
Read more

June 15, 2020
This is a class based around the idea of someone who is trying to maximize their wealth-to-danger ratio. The type of scoundrel out to make as much money as possible while being in as little danger as possible. It's a real rat bastard of a class; the kind of class that joins a war to loot bodies.

It draws inspiration mainly from Nobby Nobbs, but also from some of the soldiers in Monstrous Regiment, Arnold K's Kludger class, some Apocalypse World playbooks, orks from 40k in general, and that murder-hobo joke class I wrote for 5e a couple years ago.

GLOG Class: the Scavver (aka the Gutter Rat, the Bastard, the Second Mouse)

A: Practical Looting, Nicked It
B: Iron Rations, This Is A Knife
C: Nobody's Nobody, Survive Famous Massacres By Not Being There
D: Extremely Practical, Human Canary

Starting equipment: roll four times on the most appropriate random NPC table. From the first NPC, take whatever they would feasi…
1 comment
Read more
More posts